Untangling the concept of ‘Competency’ and ‘performance’

Like much of the languages of Human Resources the terms ‘Competency’ and ‘Performance’ have no commonly accepted meaning in practice.

‘Competency’  is sometimes defined as  a particular knowledge or skill  standard to be achieved.

More frequently it is defined as part of a behavioral repertoire – a set of behaviors that successful people demonstrate.   It is assumed these behaviors have led to their success.

If the first assumption is true it follows that if others adopt the same set of  behaviors then they too will be successful.

In the performance management context ‘Performance’ usually means work activities and behaviours – much the same meaning as a competency. Competencies are very often part of a performance appraisal, so the concepts of Competency and Performance seem to be overlapping.

A popular approach is to say that tasks describe what is to be done and competencies describe how those tasks should be done. Or that there are task behaviors and citizenship behaviors often termed ‘soft skills’.

Competency and Performance are not the same

The confusion stems from the use of the same terminology for both contexts. Competencies are often defined as ‘behaviors’ and assessed by ‘performance’ indicators.

When competency terminology is changed so that competencies have ‘descriptors’ and ‘standards’ that are ‘ met’ , ‘not met’ or ‘needs development’ the confusion disappears.

What is a competency?

Most organizations try to align individual performance with organizational purpose and strategies. In order to do this the definition of ‘performance’ should include the results that will contribute.

However ‘Expected Performance’ in job descriptions is usually defined as a list of tasks, rather than the outputs of those tasks. Just performing a task will not necessarily produce the results that the organization is looking for.

As an example ‘ Provide help desk services’ is a task – but this says nothing about the desirable outputs.

Instead most performance management systems use ‘management by objectives’. ‘SMART’ goals have to be written at least annually, creating unnecessary administrative workload.

Another problem is that the SMART goals are also often poor quality. Many are defined as tasks rather than measurable outcomes.

It is better to define performance in terms of both tasks and their expected outcomes, in a job description that is a living document.

What is the link between competency and performance?

A useful approach is to use systems thinking. To view individual workplace performance from the perspective of a system.

A system has inputs, processes and outputs. It operates in an environment. It has a control or feedback mechanism.

From this perspective the inputs to individual workplace performance are job expectations – expected tasks and results.    Competencies are the knowledge and skills needed to deliver on the job expectations.

Work activities are the process part of the system. 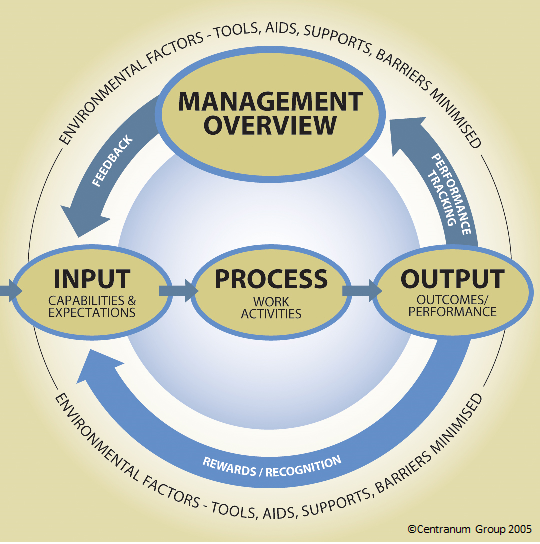